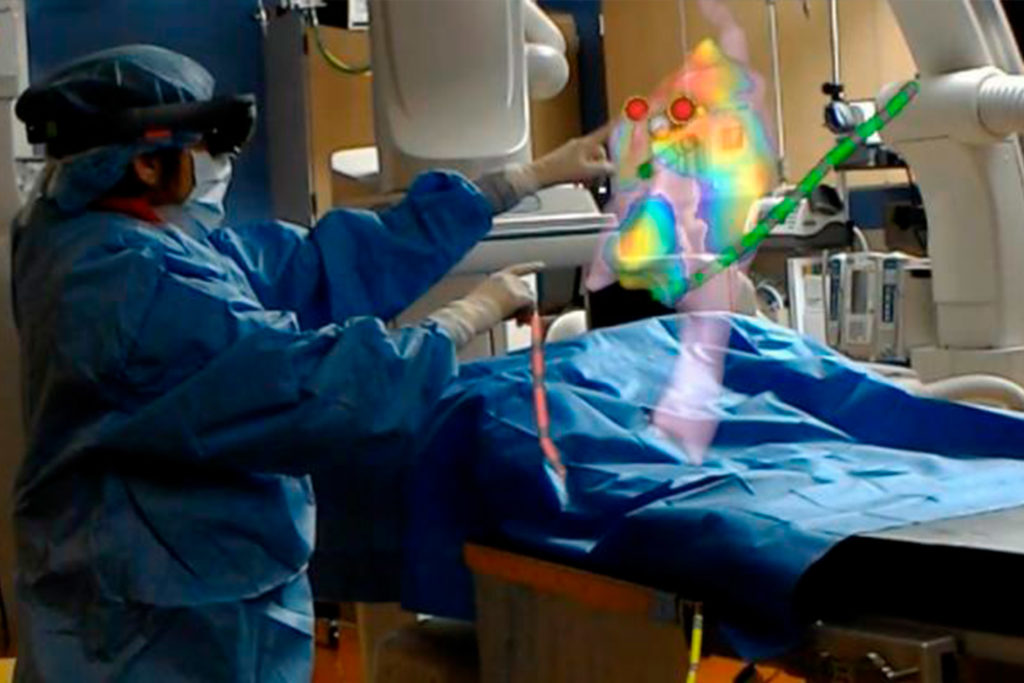 Image: The ELVIS creates a 3D augmented reality view of the heart (Photo courtesy of WUSTL)
A real-time holographic mixed-reality display can significantly improve the electrophysiologist's point navigation and accuracy during cardiac ablation, according to a new study.

The result is an augmented reality platform with real-time holographic visualization of the patient's actual anatomy "floating" over the surgical field, allowing electrophysiologists to perform the procedure by using their gaze to guide the controls. For the study, two electrophysiologists were trained on ELVIS, and then tested the system on 16 patients undergoing electrophysiology studies. The physicians were given 60 seconds to navigate to each of five target points within the geometry of the heart, using both the 3D ELVIS and standard 2D EAMS technology.

The results showed there was no difference in navigation times with either ELVIS or EAMS, but the physicians were significantly more accurate with ELVIS, with an error margin of just 2.99 mm, compared to 4.50 mm for EAMS. When translated to cardiac ablation outcomes, 34% of the ablation lesions created using EAMS would be made outside of the target area, as opposed to just 6% when using the ELVIS 3D display. The study was published on August 17, 2020, in Journal of the American College of Cardiology: Clinical Electrophysiology.

“Given the widespread promise of this technology, mixed reality has the potential to overtake and aggregate current displays in the cardiac catheterization laboratory,” concluded lead author Jennifer Silva, MD, director of pediatric electrophysiology at WUSTL. “What ended up being equally important, if not more important, was that…not only that we can visualize it better, but that we can control it. There are people working in this extended reality space who have come to conclusions that the control is the strongest value-add, particularly in medical applications.”