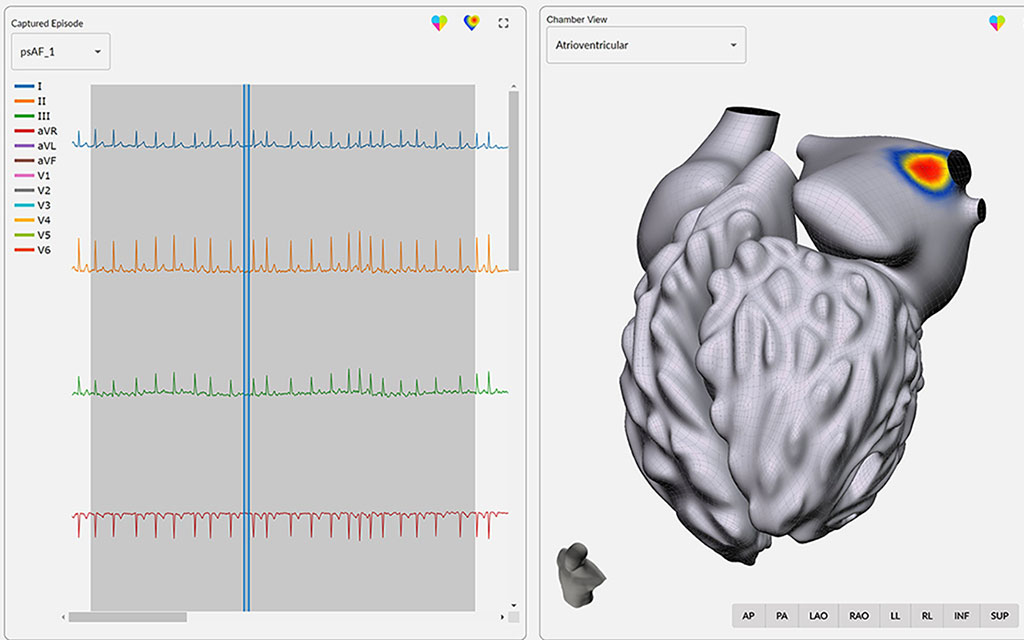 The current standard of care for treating heart arrhythmias – any type of irregular heartbeat that is too fast, too slow, or mistimed due to an electrical signal misfiring – is to carefully burn or freeze the exact spot in the heart where the electrical misfiring is coming from. This procedure, called an ablation, resets the electrical signals and heartbeat. However, before an electrophysiologist can perform an ablation, they need to know precisely where in the heart the arrhythmia is coming from. Now, a new technology can accurately and noninvasively map atrial and ventricular heart arrhythmias in a matter of minutes.

Instead of sending a catheter into a patient’s heart to localize the source of the arrhythmia, the new vMap technology requires only data from a standard noninvasive 12-lead electrocardiogram (ECG) – performed in most clinical and ambulatory settings – to create a three-dimensional interactive map of arrhythmia source locations in all four chambers of the heart. Combining computationally efficient modeling methods with modern-day computing architectures and resources, a library of over one million arrhythmia simulations was created in just under one year, a vast improvement from the tens of thousands of years it would have otherwise taken. The clinical product was then designed and implemented according to the needs and experiences of electrophysiologists. The patient’s ECG recordings are compared to this simulation database to accurately locate the source of the arrhythmia. A multicenter, blinded clinical trial showed that in 255 arrhythmia episodes from 225 patients, the vMap tool had a regional accuracy of 96.9%, with a spatial accuracy of 15mm. The median time to complete the mapping process was 48 seconds. vMap recently received FDA clearance.

“Mapping is critical to planning and performing ablation. The current process of arrhythmia localization relies upon invasive catheter mapping” said Dr. David Krummen, Assistant Professor of Medicine, electrophysiologist, and bioengineering alumnus. “It generally works well, but the process can be time consuming, increasing fluoroscopy and anesthesia exposure for the patient. Moreover, occasionally the catheter-based process may "bump" the arrhythmia source and suppress the clinical arrhythmia, preventing further mapping.”

“We wanted to find a way to pinpoint the arrhythmia source location using data from the 12-lead ECG,” he added. “The 12-lead ECG is used in a variety of clinical settings outside the electrophysiology laboratory including the emergency department, the intensive care unit, and the outpatient clinic. One of the major goals of the system is to leverage arrhythmia data from these ECGs to potentially allow arrhythmia source mapping prior to arrival in electrophysiology lab.”

“It’s one thing to make fancy simulations, but it’s altogether another to make something that can be used in the pressure of a clinic, in a matter of minutes, that’s reliable,” said bioengineering Professor Andrew McCulloch. “And we’ve shown that vMap meets all these needs.”