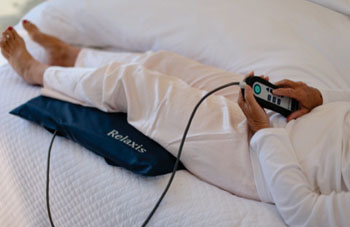 The Relaxis device is based on a low-profile pad that the patients place at the site of their discomfort during a nighttime RLS attack, usually under the calf or thigh. The patient then activates the pad, which is engineering for automatic shut off with a ramp-down feature that completes the cycle after approximately 30 minutes. The vibration from the pad is essentially a form of counter-stimulation that gradually decreases in intensity so that the patient is not awakened when it stops.

The Relaxis Pad is only intended for use on patients with primary RLS. It is not intended to be used by people with skin disorders such as eczema, psoriasis, cellulitis, nonhealing wounds, or those who have secondary RLS. The device should also not be used on patients who have been diagnosed with deep venous thrombosis (DVT) in either leg during the previous six months due to a known potential to dislodge or fragment the clot and cause a pulmonary embolism. The Relaxis Pad is a product of Sensory Medical (San Clemente, CA, USA) and has been approved by the US Food and Drug Administration (FDA).

"Relaxis represents the first prescription, noninvasive, nonmedication alternative for improving quality of sleep in patients with primary restless legs syndrome, a significant health problem that affects millions of people each year,” said Fred Burbank, MD, CEO of Sensory Medical and a RLS sufferer. “Until now, patients' only options were to suffer unaided through their condition, or face the potential side effects of long-term medication therapy.”

RLS, also known as Willis-Ekbom disease (WED) is a neurological disorder characterized by an irresistible urge to move one's body to stop uncomfortable or odd sensations. It most commonly affects the legs, but can affect the arms, torso, head, and even phantom limbs. In the most severe cases, RLS attacks may occur several times per night, repeatedly causing interrupted sleep and impaired daytime functioning. Moving the affected body part modulates the sensations, providing temporary relief.

The sensations typically begin or intensify during quiet wakefulness, such as when relaxing, reading, studying, or trying to sleep. Among the most impacted are the middle-aged or older, as symptoms tend to increase in both frequency and duration with age; it is twice as prevalent in women. To alleviate RLS symptoms, medication therapy is often prescribed, including dopaminergic agents used to treat Parkinson's disease, anticonvulsants, narcotic opioids, muscle relaxants, and benzodiazepines.