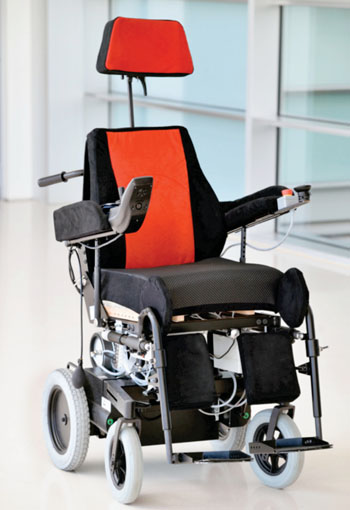 The Pressure Ulcer Measurement and Actuation (PUMA) project, coordinated by the Biomechanics Institute of Valencia (IBV; Spain) is composed of three independent elements that work together: a postural control system, a dynamic cushion, and a smart textile embedded in a pair of shorts worn by the user that measures pressure and tissue viability, and which can also apply functional electro stimulation (FES) when needed to improve circulation and muscle tone.

The cushion and the shorts send information in real time to the postural control system embedded into the wheelchair, which is controlled by the user using a Smartphone app which evaluates the data and is able to identify postural risks in each situation. For example, the app could detect the limit time spent by the wheelchair user in the same position and propose various actions to prevent the PU form forming, such as changing the chair position (back, seat, and footrest), modifying the cushion, or directly applying FES in risk areas.

“PUMA solution is the result of a two-year research project. During the first stage, we gathered information about the needs and anthropometric and physiological characterization of T-SCI patients that adversely affect the occurrence of PU,” said technical project manager, José Laparra Hernández, MSc, of IBV. “Afterwards we studied and compared different tissue viability measuring systems in order to embed them in smart textiles.”

Pressure ulcers are lesions caused by factors such as unrelieved pressure; friction; humidity; shearing forces; temperature; age; continence and medication. They can occur in any part of the body, but especially over bony or cartilaginous areas such as sacrum, elbows, knees, and ankles. Although often prevented and treatable if found early, they can be very difficult to prevent in frail elderly patients, wheelchair users, and terminally ill patients.