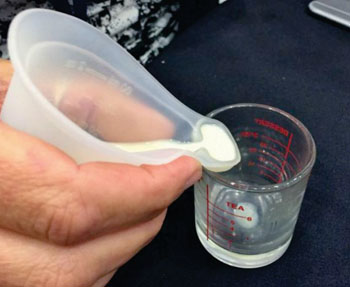 Image: The NIFTY cup (Photo courtesy of PATH).
A novel cup has been designed to facilitate feeding and prevent starvation in infants in developing countries who are unable to breastfeed.

The Neonatal Intuitive Feeding TechnologY (NIFTY) cup, developed at Seattle Children's Hospital (WA, USA), PATH (Seattle, WA, USA), and the University of Washington (Seattle, USA) is designed to mimic breastfeeding. Key features include an extended reservoir off the lip of the cup made of a durable, soft silicone material that holds a small amount of milk, ensuring efficient delivery where the infant is able to pace feeding on its own. Mothers can directly express their breast milk into the 60-mL cup, reducing possible cross-contamination from other containers.

The quick-drying, UV-resistant, silicone cup can be boiled for sterilization, and is ergonomically designed to enhance finger and wrist control over milk flow. An embossed measurement scale helps keep track volume and intake of milk. The first prototype of the NIFTY cup was evaluated in Southern India with infants that had clefts or were born prematurely. The feedback was used to help refine the cup’s design, spearheaded by Christy McKinney, PhD, MPH, of the University of Washington, who was instrumental in designing the NIFTY cup.

“Our collaborative team has worked tirelessly with modest funding for the last five years to realize this vision, so it is wonderful to have the NIFTY cup recognized in this way,” said Patricia Coffey, PhD, MPH, leader of the Health Technologies for Women and Children group at PATH. “We are confident that we have a great team in place to move the product through validation as quickly as possible and into the hands of those who need it.”

Each year, approximately nine million babies in Africa and South Asia have difficulties breastfeeding because they are either premature, have craniofacial anomalies like cleft lip and palate, or are born to mothers who die of birth-related causes, putting these infants at risk of dying from starvation. The World Health Organization (WHO, Geneva, Switzerland) recommends the use of a small cup to feed these newborns in low-resource settings, but there is no standard feeding tool in existence.