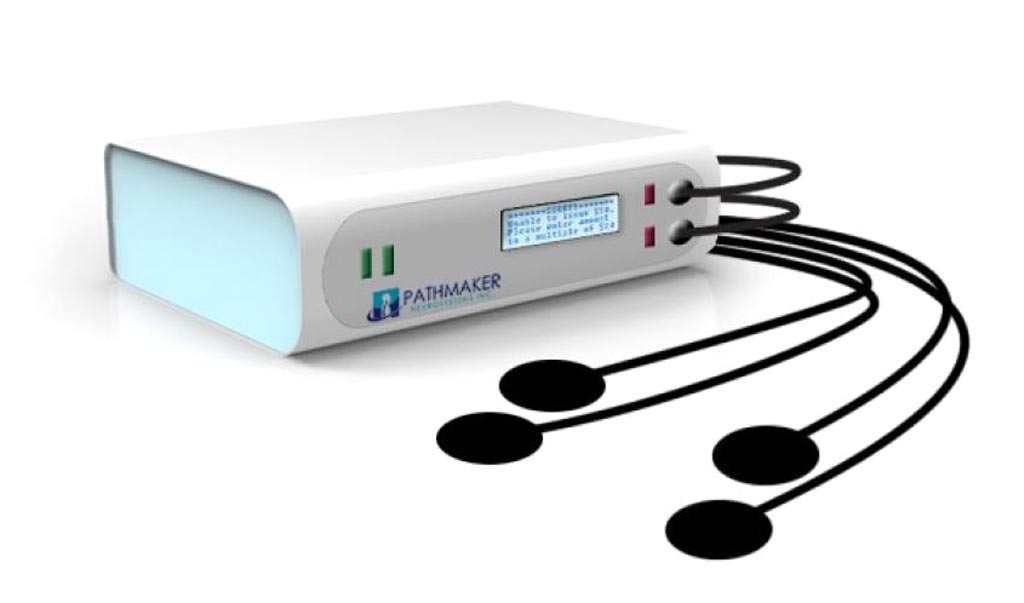 The PathMaker Neurosystems (Boston, MA, USA) MyoRegulator is microprocessor-controlled device powered by rechargeable batteries that delivers paired tsDCS+pDCS stimulation to suppress the hyperexcitable spinal neurons involved with spasticity. Two pairs of sponge electrodes soaked with saline prior to application are used. One set of electrodes delivers up to 4 mA of tsDCS, with the anode placed on the spine at the C6 level, and the cathode placed above the iliac crest. In the pDCS set of electrodes, the anode is placed proximal to the cathode, on the median nerve, delivering 1 mA of direct current.

In a single-blind, sham-controlled, crossover design study that included 23 patients with upper limb hemiparesis and wrist spasticity at least 6 months after their initial stroke, results showed significant, durable group mean reductions from baseline in both Modified Tardieu Scale scores and objectively measured muscle resistance at the wrist flexor following active treatment, as compared to sham. Motor function also improved significantly, even without additional prescribed activity or training. The study was published in the July 2019 issue of Bioelectronic Medicine.

“Current pharmacological approaches to managing spasticity have, at best, short-term efficacy, are confounded by adverse effects, and are often unpleasant for the patient,” said study co-author Professor Zaghloul Ahmed, PhD, chairman of the department of physical therapy at City University of New York (NY, USA), and scientific founder of PathMaker Neurosystems. “The initial study results demonstrate the potential of a novel, non-invasive treatment to reduce spasticity and improve functional recovery in patients with upper motor neuron syndrome after stroke.”

Spasticity is a muscle control disorder caused by an imbalance between signals sent by the central nervous system (CNS) to the muscles. It often found in people with cerebral palsy, traumatic brain injury (TBI), SCI, stroke and multiple sclerosis (MS). It is characterized by increased muscle tone, overactive reflexes, involuntary movements such as spasms and clonus, pain, abnormal posture, contractures and bone and joint deformities. Spasticity presents a difficult challenge and is currently managed primarily by pharmacological agents and injected botulinum neurotoxins.

A new antimicrobial coating for urinary catheters and other medical devices can significantly reduce pain and risk of infection, according to a new study. The coating, developed at Queen's University... Read more