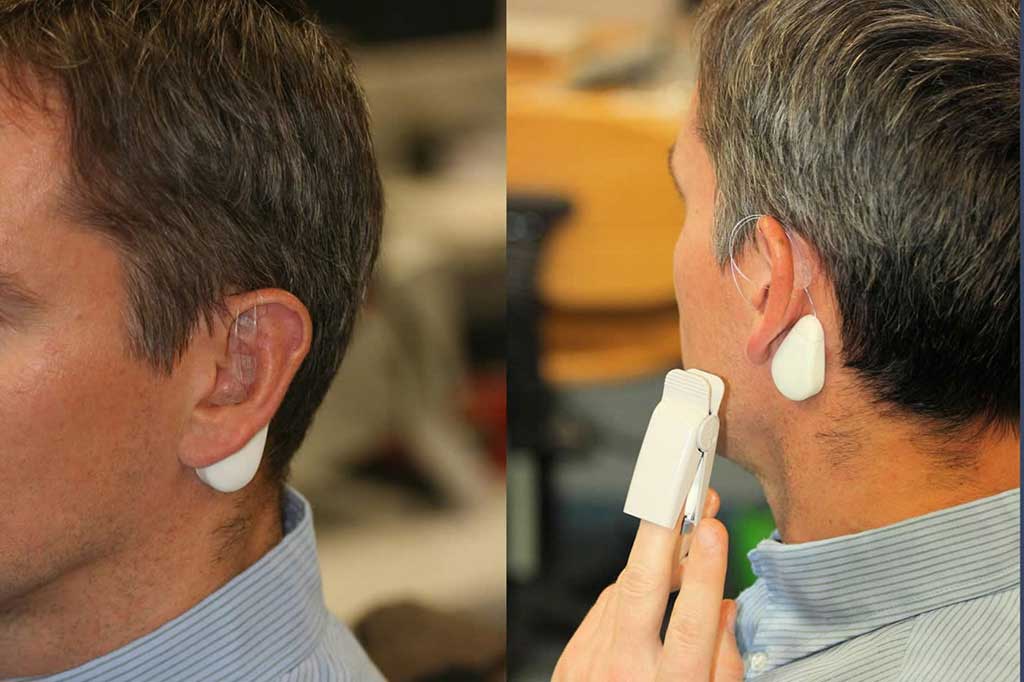 Image: Electrical pulses in the ear can reduce chronic pain (Photo courtesy of TU Wien)
A new study suggests that a triphasic stimulation pattern of vagus nerve branches in the human ear is effective in alleviating chronic pain.

Researchers at the Medical University of Vienna (MedUni; Austria), the Vienna University of Technology (TU Wien; Austria), and other institutions used high-resolution episcopic imaging (HREM) to generate histologic volume data from donated human cadaver ears. They used the data to reconstruct anatomical vascular and nerve structures of the auricular cymba conchae (CC), with visualization of the anatomical structures, including diameters, occupied areas, volumes, and mutual distances between the auricular arteries, nerves, and veins. The 3D computer model was then used to calculate an optimal stimulation pattern of vagal nerve branches.

The density of vessels and nerves around any given point on a grid within the CC was then assessed, showing that 50% of all vessels and nerves were found in areas within a radial distance of 1.6–1.8 mm from three specified points. The resulting signal pattern suggested that three electrodes, each delivering a series of oscillating, asynchronous electrical pulses with a specific time delay, is very effective for pain control. The triphasic stimulation pattern was tested on volunteers suffering from chronic pain, and proven correct. The study was published on May 12, 2020, in Frontiers in Neuroanatomy.

“The blood vessels can be made clearly visible in patients by shining light through the ear. The nerves, however, cannot be seen,” said study co-author Professor Wolfgang Weninger, MD, of the MedUni Vienna division of anatomy. “Our microanatomical measurements on donated human bodies now tell us exactly where the nerves run in relation to blood vessels, as well as the average distance between blood vessels and nerves at certain important positions of the ear. This helps us to find the correct spot for placing the stimulation electrodes.”

“In our computer simulation, it was shown for the first time that from a biophysical point of view, a triphasic signal pattern should be helpful, similar to what is known from power engineering, only with much lower magnitude,” said senior author Professor Eugenijus Kaniusas, PhD, of the Institute of Electrodynamics. “Vagus nerve stimulation is often a lifesaving option, especially for people with chronic pain who have already been treated with other methods and do not respond to medication anymore.”

The vagus nerve is the tenth cranial nerve, and interfaces with parasympathetic control of the heart, lungs, and digestive tract. It is the longest nerve of the autonomic nervous system, supplying motor parasympathetic fibers to all the organs (except the adrenal glands), from the neck down to the second segment of the transverse colon. It also innervates several skeletal muscles, including the cricothyroid, the superior, middle, and inferior pharyngeal constrictors.