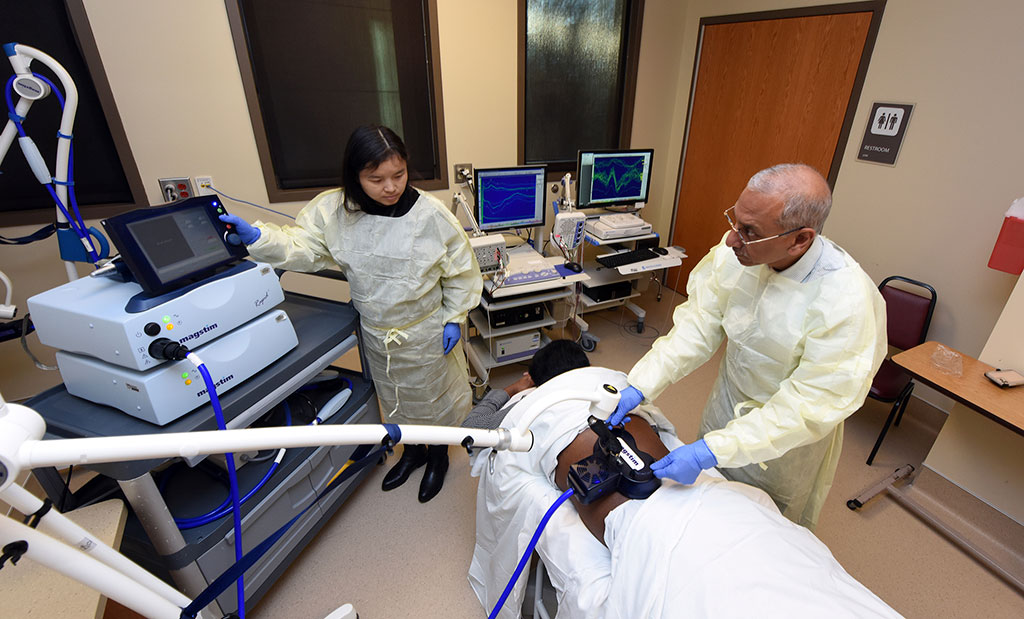 Image: Dr. Satish Rao MD performing TNT on a patient with FI (Photo courtesy of Medical College of Georgia)
Translumbosacral neuromodulation therapy (TNT) of nerves that regulate muscles in the anus and rectum dramatically reduce episodes of fecal incontinence (FI), according to a new study.

Researchers at the Medical College of Georgia (MCG; Augusta USA) and the University of Manchester (United Kingdom) conducted a study involving 33 patients with FI (23 women, average 60 years of age) who were randomized to receive six sessions of weekly TNT treatments. The treatment consisted of 600 repetitive magnetic stimulations over each of two lumbar and two sacral sites with 1, 5, or 15 Hz frequency stimulations. Stool diaries, FI severity indices, anorectal neurophysiology, sensorimotor function, and quality of life were compared.

“We found there was significant improvement in fecal incontinence across the board, which told us something is happening with this treatment. There is an effect on nerve function which, in turn, is leading to improvement of symptoms,” said lead author Satish Rao MD, PhD, of MCG. “We have identified that nerve damage is an important mechanism in the pathogenesis of stool leakage. A noninvasive and targeted treatment to correct the nerve damage addresses this pervasive problem.”

Fecal incontinence, also known as accidental bowel leakage (ABL), is the inability to control bowel movements and is a common problem, especially among older adults. FI particularly affects women who have experienced pregnancy, childbirth, or nerve or muscle damage in the pelvic region. As there are multiple causes for bowel control problems, effective treatment is particularly difficult, and usually includes dietary modification, medical management, physical therapy, and often surgery or surgical implants. FI impacts women about twice as often as men.