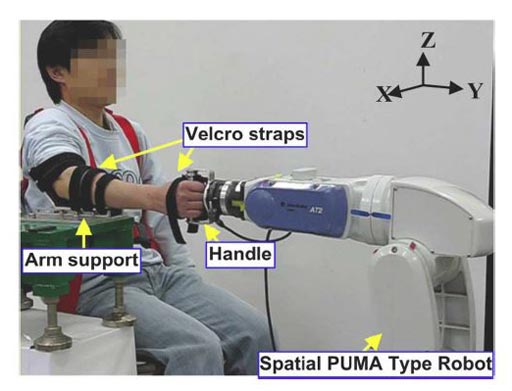 Image: An experimental setup for the estimation of 3DOF human forearm and wrist impedance (Photo courtesy of UNIST).
A new study describes how robotic-assisted rehabilitation therapy can assess muscle activity and movement dysfunction in stroke survivors, helping to improve their mobility.

The accuracy and reliability of the system were experimentally validated using a robot with substantial nonlinear joint friction. The 3DOF human forearm and wrist impedance of eight healthy subjects was reliably characterized, and its linear behavior helped verify the dIMBIC-based method. The researchers suggest that dIMBIC 3DOF impedance estimation can promote motor control studies and complement the diagnosis of altered wrist and forearm resistance post-stroke by providing objective impedance estimates, including cross-coupled terms. The study was published in the May 2017 issue of IEEE Transactions on Neural Systems and Rehabilitation Engineering.

“The dIMBIC-based method can be used to assist in the quantitative and objective evaluation of neurological disorders, like stroke,” said senior author Professor Sang Hoon Kang, PhD, of the UNIST department of system design and control engineering, robotics, and rehabilitation engineering laboratory. “Findings from this study will open a new chapter in robot-assisted rehabilitation in the workplace accident rehabilitation hospitals, as well as in nursing homes and assisted living facilities.”

Human upper limb movement has been studied in detail, with the basic movements defined as roll – a rotational movement; yaw – a sideways movement in a horizontal plane; and pitch – an up and down movement in vertical plane. The human upper limb has seven degrees of freedom - three in the shoulder, one in the elbow, and another three in wrist.