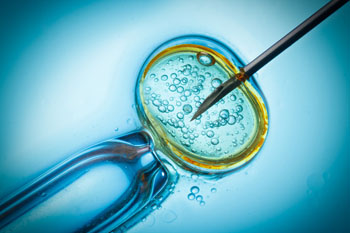 Image: The IVF insemination procedure (Photo courtesy 123rf.com).
Women undergoing ovarian stimulation for in vitro fertilization (IVF) treatment do not have an increased risk of breast cancer (BC), according to a new study.

Researchers at the Netherlands Cancer Institute (NKI; Amsterdam, The Netherlands), Catharina Hospital (Eindhoven, The Netherlands), and other Dutch institutions conducted a study among 19,158 women who started IVF treatment between 1983 and 1995 and 5,950 women who started other fertility treatments between 1980 and 1995 from all 12 Dutch IVF clinics. Information on ovarian stimulation for IVF, other fertility treatments, and potential confounders was collected from medical records and through mailed questionnaires. The main outcome was incidence of invasive and in situ BC.

The results showed that after a median follow-up of more than two decades, BCincidence among IVF patients was relatively comparable with the non-IVF comparison group. The cumulative incidence of BC at age 55 was also nonsignificant when comparing the two groups (3% for IVF group and 2.9% for non-IVF group). The researchers noted that women who had seven or more IVF cycles had a significantly lower risk of BC than women who underwent just one or two cycles. The study was published on July 19, 2016, in the Journal of the American Medical Association (JAMA).

“The risk did not differ by type of fertility drugs or subfertility diagnosis, and was not increased at 20 or more years after IVF treatment. Poor response to the first IVF cycle was also associated with decreased breast cancer risk,” concluded lead author Alexandria W. van den Belt-Dusebout, PhD, of the NKI, and colleagues. “These findings are consistent with the absence of a significant increase in the long-term risk of breast cancer among women treated with these IVF regimens.”

IVF is the process of fertilization by manually combining an egg and sperm in a laboratory dish, and then transferring the embryo to the uterus. To increase success rates, various ovarian stimulation protocols are used to induce the ovaries to make more follicles and eggs. The most commonly used stimulation regimens include injections of follicle stimulating hormone (FSH), with the goal of getting approximately 8 to 15 quality eggs at the egg retrieval procedure.