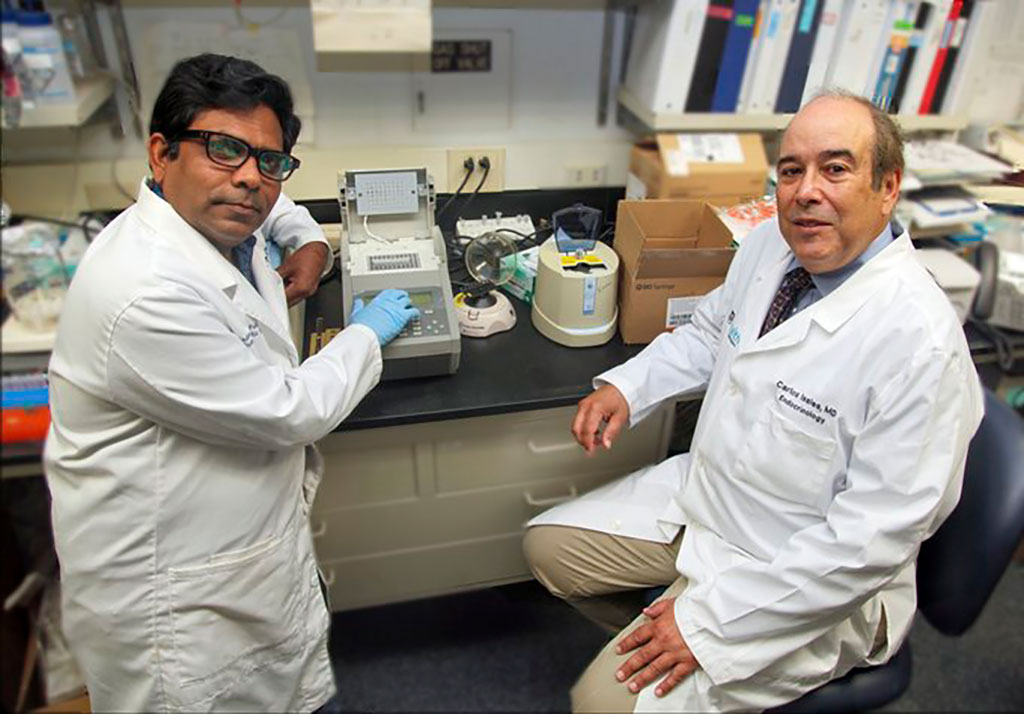 Image: Drs. Carlos Isales and Sadanand Fuzele (Photo courtesy of Augusta University)
Researchers have found that a group of tiny RNA which should attack the virus causing COVID-19 when it tries to infect the body diminishes with age and chronic health problems, possibly explaining why older individuals and those with pre-existing medical conditions are vulnerable.

According to researchers from the Medical College of Georgia at Augusta University (Augusta, GA, USA), microRNAs play a significant role in the human body in controlling gene expression and also act as a front line when viruses invade, latching onto and cutting the RNA, the genetic material of the virus. However, the number of attacking microRNAs dwindles with age and due to chronic medical conditions, thus reducing human ability to respond to viruses. This reduction in the key microRNAs involved in responding to the coronavirus allows it to hijack human cell machinery more easily in order to replicate.

In order to identify the key microRNAs and ways to increase their numbers, the researchers studied the RNA sequence of SARS, which surfaced in 2002, and SARS-CoV-2, which causes COVID-19, and the sequence of the microRNAs that appeared to be attacking the virus. The team then used computer simulation to figure out which would logically fit together like puzzle pieces. They examined four samples of SARS and 29 samples of SARS-CoV-2, taken between January and April 2020 from five continents covering 17 countries from the US to Germany to Thailand.

The researchers found 848 microRNAs that target the SARS genome and 873 microRNAs that target SARS-CoV-2 genome. They found 558 of the microRNAs fighting SARS also present in SARS-CoV-2, while 315 microRNAs were unique to SARS-CoV-2, and 290 were unique to SARS. MicroRNAs most proficient at attacking SARS-CoV-2 showed more than 10 target sites and might ultimately be found to be the most proficient at fighting the virus. They also found the microRNAs targeting SARS-CoV-2 were associated with more than 72 biological processes — from the production of molecules to the immune response — and that many are known to become dysregulated and/or diminish in number with age and with underlying medical conditions like diabetes and cardiovascular disease, a likely factor in the increased disease presentation and death rates seen in these individuals, according to the researchers. In the 29 worldwide samples of SARS-CoV-2, 19 had identical microRNAs, which indicates the virus has a fairly uniform presence internationally and that any effective treatments or vaccines should have broad impact.

The researchers suggest that administering cocktails of multiple key microRNA through the nose could help restore sufficient levels of the key virus fighters. The researchers are now moving toward producing synthetic microRNA that could supplement this frontline weakened by age or disease. Future studies also include pinning down which microRNA would be most impactful as an adjunct therapy, for example with the drug remdesivir, under study now for COVID-19, which works to stop the virus’ pirating of healthy cell machinery.

“My perspective is there is a key set of microRNAs that are important in triggering this abnormal response, in making older patients more susceptible,” said Dr. Carlos M. Isales, co-director of the MCG Center for Healthy Aging and chief of the MCG Division of Endocrinology, Diabetes and Metabolism. “We are looking at microRNAs in general dropping, but there is a specific subset that is key. The question is whether we can we target those as a therapy.”