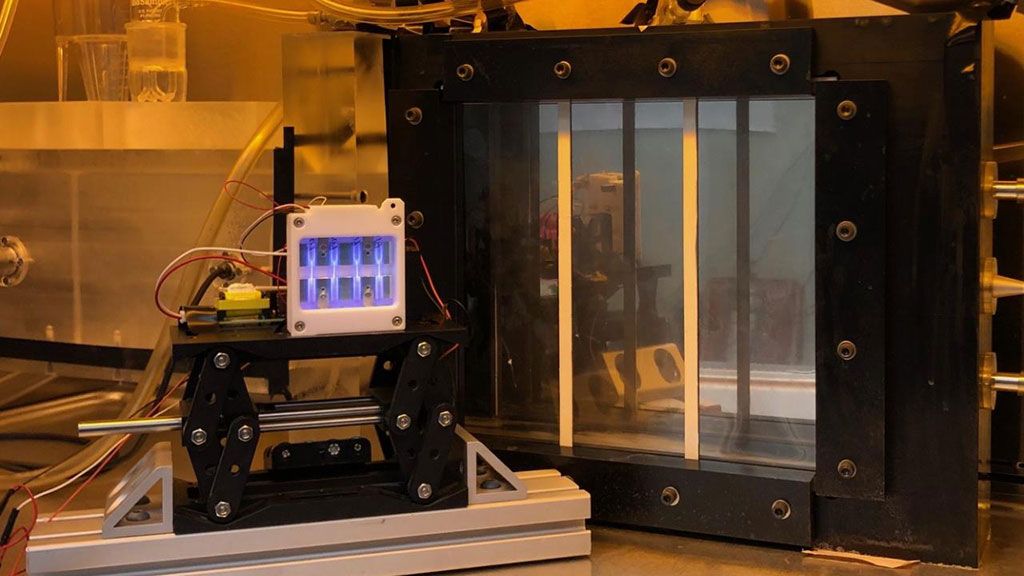 Image: Equipment used to test the effect of far-UVC light on airborne coronaviruses (Photo courtesy of Center for Radiological Research at Columbia University)
A new study has found that more than 99.9% of seasonal coronaviruses present in airborne droplets were killed when exposed to a particular wavelength of ultraviolet light that is safe to use around humans.

Researchers at Columbia University Irving Medical Center (New York, NY, USA) have been investigating far-UVC light (222 nm wavelength) to continuously and safely disinfect occupied indoor areas. Conventional germicidal UVC light (254 nm wavelength) can be used to disinfect unoccupied spaces such as empty hospital rooms or empty subway cars, but direct exposure to these conventional UV lamps is not possible in occupied public spaces, as this could be a health hazard. On the other hand, far-UVC light cannot penetrate the tear layer of the eye or the outer dead-cell layer of skin and so it cannot reach or damage living cells in the body. The researchers had previously shown that far-UVC light can safely kill airborne influenza viruses.

“Based on our results, continuous airborne disinfection with far-UVC light at the current regulatory limit could greatly reduce the level of airborne virus in indoor environments occupied by people,” says the study’s lead author David Brenner, PhD, Higgins Professor of Radiation Biophysics at Columbia University Vagelos College of Physicians and Surgeons and director of the Center for Radiological Research at Columbia University Irving Medical Center.

“Because it’s safe to use in occupied spaces like hospitals, buses, planes, trains, train stations, schools, restaurants, offices, theaters, gyms, and anywhere that people gather indoors, far-UVC light could be used in combination with other measures, like wearing face masks and washing hands, to limit the transmission of SARS-CoV-2 and other viruses,” added Brenner.