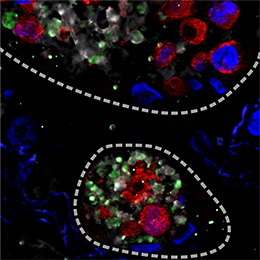 Illustration
A team of researchers has demonstrated that activated immune cells and blood platelets play a major role in severe cases of COVID-19 infection that leads to obstruction of the blood vessels in the lung, heart and kidneys.

The novel coronavirus SARS-CoV-2 infects the respiratory tract and in severe cases, the infection can result in lung failure, which necessitates the use of mechanical ventilation. In addition, these patients develop further complications, such as pulmonary embolisms or thromboses (clots) in their veins. Whether or not virus-associated respiratory failure is functionally related to the systemic increase in the incidence of intravascular clot formation has remained unclear.

However, a new study by researchers from the Ludwig Maximilian University of Munich (Munich, Germany) has identified a link between virus-induced changes in the blood vessels of the lung and the increased thrombotic risk. Upon post-mortem examination of the lungs of COVID-19 patients who had died of the disease, the researchers found several microclots within the finest branches of the pulmonary vasculature. Similar observations were made in the heart and the kidney.

These clots were primarily made up of platelets and activated immune cells, in particular neutrophils. Detailed analysis of the thrombi suggested that an activating interaction between platelets and neutrophils is responsible for promoting intravascular coagulation. Neutrophils belong to the innate immune system and their principal task is to fight invading pathogens. Their involvement in abnormal clotting has led to the designation of this process as immunothrombosis. In COVID-19 patients, the stimulation of clot formation eventually compromises the supply of blood to nearby tissues. This, in turn, ultimately leads to respiratory failure, while the tendency to trigger clotting becomes systemic.

Using multidimensional flow cytometry assays, the researchers showed that in COVID-19 patients who had suffered lung failure and required mechanical ventilation, the numbers of activated neutrophils and platelets in the circulation were greatly enhanced. Since the two cell types reciprocally activate each other, these interactions lead to the formation of obstructive blood clots in the lung. In addition, activated neutrophils extrude mesh-like complexes made up of DNA and cytoplasmatic proteins, which are known as neutrophil extracellular traps (NETs). These normally serve to trap and destroy bacterial and viral pathogens, but they also play a significant role in immunothrombosis by stabilizing thrombi. While this process is initially localized in the lung exacerbating respiratory failure and result in a systemic thrombogenic state.

“These findings contribute to a better understanding of the pathophysiology that underlie disease progression in COVID-19,” said LMU clinician Konstantin Stark who led the study. “The study also identifies immunothrombosis as a promising target for the prevention and treatment of lung failure and thrombotic complications that arise in cases of COVID-19.”