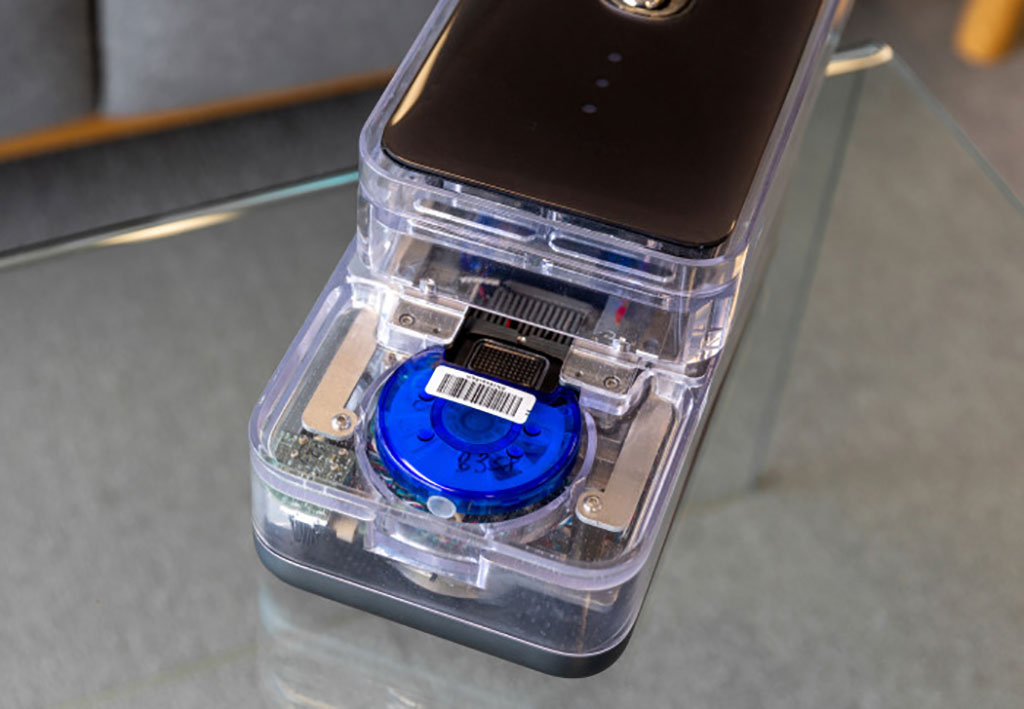 Image: The blue circular CovidNudge cartridge inside the NudgeBox analyzer (Photo courtesy of Imperial College London)
A 90-minute COVID-19 test has been shown to have over 94% sensitivity and 100% specificity in a new study.

In the study, scientists from the Imperial College London (London, UK) used high-speed tests which do not require a laboratory and can be performed in cartridges smaller than a mobile phone. To perform the test, a pediatric-sized nose swab from a patient is inserted into the device, which then looks for traces of genetic material belonging to the SARS-CoV-2 virus, which causes COVID-19. A result is available within 90 minutes, compared to conventional COVID-19 testing which delivers a result in 24 hours.

The samples from all individuals in the study were analyzed on both the rapid-testing device, called the CovidNudge test, and standard hospital laboratory equipment - and then the results compared. The Lab-in-Cartridge rapid testing device, which can be performed at a patient’s bedside, was shown to have over 94% sensitivity and 100% specificity, suggesting a high level of accuracy and the ability to produce very few false negatives and no false positives. The test is now being developed for assessing simultaneously Flu-A, Flu-B, and RSV as well as COVID19.

“These results suggest the test, which can be performed at a patient’s bedside without the need to handle any sample material, has comparable accuracy to standard laboratory testing,” said Professor Graham Cooke, lead author of the study from the Department of Infectious Disease at Imperial. “Many tests involve a trade-off between speed and accuracy, but this test manages to achieve both. Developing an effective bedside test in under three months has been an incredible collaboration between teams of engineers, clinicians and virologists.”