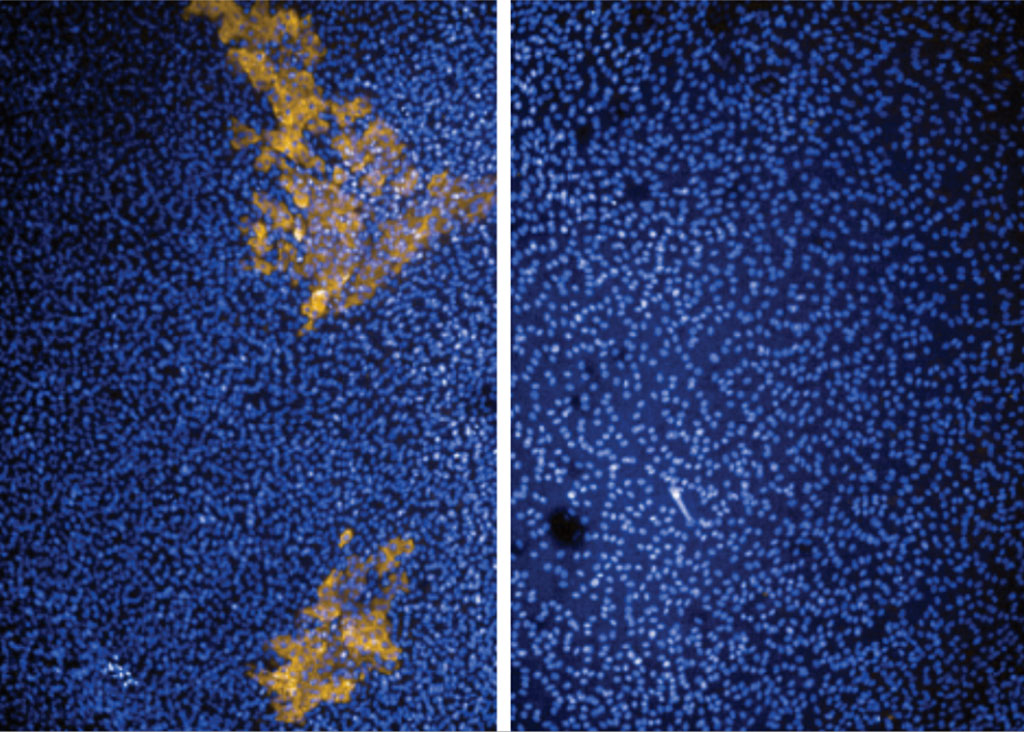 Image: As seen here with microscopy, lung epithelial cells infected with SARS-CoV-2 (left, yellow) were successfully treated with the STING agonist diABZI (right) by Penn Medicine researchers (Photo courtesy of Penn Medicine)
Scientists have discovered a new drug that blocks multiple SARS-CoV-2 variants in mice and could prove to be a potential game-changer in the treatment of COVID-19.

The drug diABZI discovered by researchers at Penn Medicine (Philadelphia, PA, USA) activates the body’s innate immune response and was highly effective in preventing severe COVID-19 in mice infected with SARS-CoV-2. The finding, suggest that diABZI could also treat other respiratory coronaviruses.

The SARS-CoV-2 virus initially targets epithelial cells in the respiratory tract. As the first line of defense against infection, the respiratory tract’s innate immune system recognizes viral pathogens by detecting their molecular patterns. The research team first sought to better understand this effect by observing human lung cell lines under the microscope that had been infected with SARS-CoV-2. They found that the virus is able to hide, delaying the immune system’s early recognition and response. The researchers predicted that they may be able to identify drugs - or small molecules with drug-like properties - that could set off this immune response in the respiratory cells earlier and prevent severe SARS-CoV-2 infection.

To identify antiviral agonists that would block SARS-CoV-2 infection, the researchers performed high throughput screening of 75 drugs that target sensing pathways in lung cells. They examined their effects on viral infection under microscopy and identified nine candidates -including two cyclic dinucleotides (CDNs) - that significantly suppressed infection by activating STING (the simulation of interferon genes).

Since CDNs have low potency and make poor drugs, the team decided to also test a newly-developed small molecule STING agonist called diABZI, which is not approved by the Food and Drug Administration but is currently being tested in clinical trials to treat some cancers. The researchers found that diABZI potently inhibits SARS-CoV-2 infection of diverse strains, including variant of concern B.1.351, by stimulating interferon signaling.

Finally, the researchers tested the effectiveness of diABZI in transgenic mice that had been infected with SARS-CoV-2. Because the drug needed to reach the lungs, diABZI was administered through a nasal delivery. diABZI-treated mice showed much less weight loss than the control mice, had significantly-reduced viral loads in their lungs and nostrils, and increased cytokine production - all supporting the finding that diABZI stimulates interferon for protective immunity.

The study’s findings offer promise that diABZI could be an effective treatment for SARS-CoV-2 that could prevent severe COVID-19 symptoms and the spread of infection. Additionally, since diABZI has been shown to inhibit human parainfluenza virus and rhinovirus replication in cultured cells, the STING agonist may be more broadly effective against other respiratory viruses.

“Few drugs have been identified as game-changers in blocking SARS-CoV-2 infection. This paper is the first to show that activating an early immune response therapeutically with a single dose is a promising strategy for controlling the virus, including the South African variant B.1.351, which has led to worldwide concern,” said senior author Sara Cherry, PhD, a professor of Pathology and Laboratory Medicine and scientific director of the High-Throughput Screening (HTS) Core at Penn Medicine. “The development of effective antivirals is urgently needed for controlling SARS-CoV-2 infection and disease, especially as dangerous variants of the virus continue to emerge.”