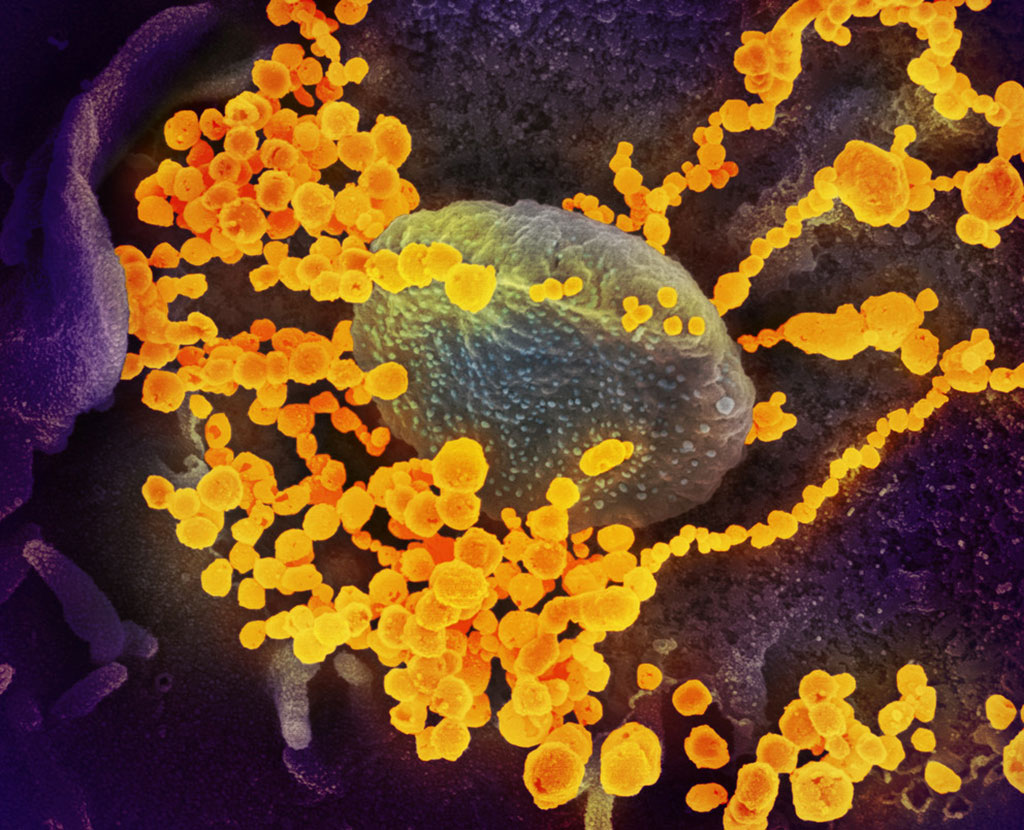 Image: A scanning electron microscope image showing SARS-CoV-2 (round gold objects), the virus that causes COVID-19, emerging from the surface of cells cultured in the lab (Photo courtesy of NIAID)
The experimental drug TEMPOL may be a promising oral antiviral treatment for COVID-19 and can limit SARS-CoV-2 infection by impairing the activity of a viral enzyme called “RNA replicase,” according to a new study of cell cultures.

The study by a team of researchers that included scientists at Penn State (University Park, PA, USA) and led by the National Institutes of Health’s Eunice Kennedy Shriver National Institute of Child Health and Human Development (NICHD) discovered TEMPOL’s effectiveness by evaluating a more basic question on how the virus uses its RNA replicase, an enzyme that allows SARS-CoV-2 to replicate its genome and make copies of itself once inside a cell.

Identifying this characteristic of the RNA replicase also enables researchers to exploit a weakness in the virus. TEMPOL can degrade iron-sulfur clusters, and previous research has shown the drug may be effective in other diseases that involve iron-sulfur clusters. In cell culture experiments with live SARS-CoV-2 virus, the study team found that the drug can inhibit viral replication. Based on previous animal studies of TEMPOL in other diseases, the study authors noted that the TEMPOL doses used in their antiviral experiments could likely be achieved in tissues that are primary targets for the virus, such as the salivary glands and the lungs. The study team plans on conducting additional animal studies and will seek opportunities to evaluate TEMPOL in a clinical study of COVID-19.

“The virtue of this technique is that it allows for identification and quantification of all iron-containing species contained in a sample,” said Carsten Krebs, Professor of Chemistry and of Biochemistry and Molecular Biology at Penn State.

"Why this enzyme requires iron-sulfur clusters, which are most often associated with electron transport, remains an intriguing question for the future," said Professor of Chemistry and of Biochemistry and Molecular Biology J. Martin Bollinger Jr., a member of the research team at Penn State.