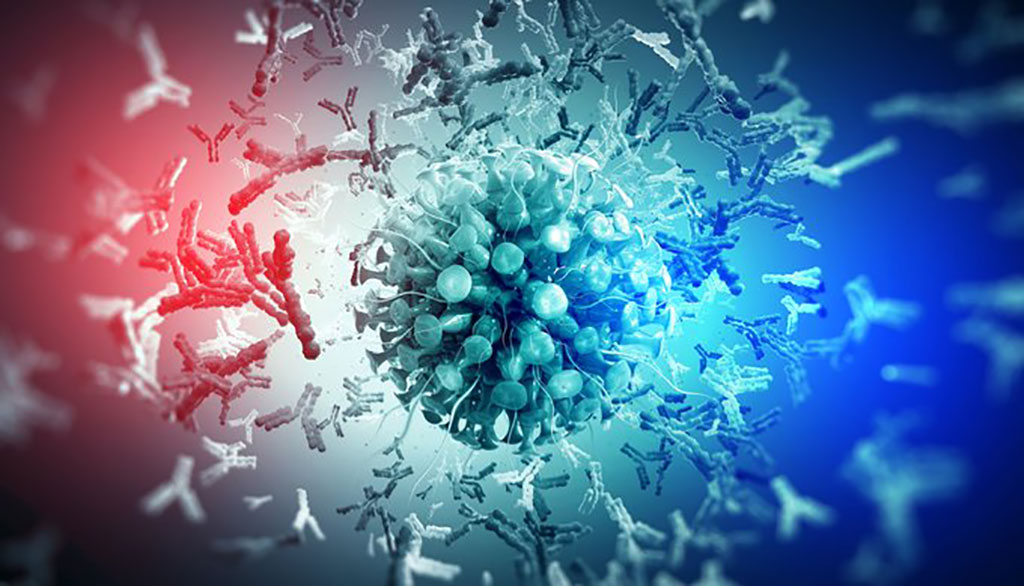 Image: An illustration of antlbodies surrounding a virus (Photo courtesy of Stanford Medicine)

Blood drawn from patients shortly after they were infected with SARS-CoV-2, the virus that causes COVID-19, may indicate who is most likely to land in the hospital, according to a new study.

Researchers at Stanford Medicine (Stanford, CA, USA) looking at antibodies in patients soon after they were infected with the virus that causes COVID-19 found key differences between those whose cases remained mild and those who later developed severe symptoms. For the study, the researchers collected blood samples from 178 adults who had tested positive for COVID-19. At the time of testing, these individuals’ symptoms were universally mild. As time passed, 15 participants developed symptoms bad enough to land them in the emergency department. Analyzing the antibodies in blood samples taken from study participants on the day of their coronavirus test and 28 days later, the researchers ferreted out some notable differences between those who developed severe symptoms and those who didn’t.

Antibodies are proteins shaped, roughly speaking, like two-branched trees. They’re produced by immune cells and secreted in response to things the body perceives as foreign, such as microbial pathogens. An amazing feature of antibodies is that their branches can assume a multitude of shapes. The resulting spatial and electrochemical diversity of the areas defined by antibodies’ branches and their intersection is so great that, in the aggregate, antibodies take on all comers. When an antibody’s shape and electrochemistry is complementary to a feature of a pathogen, it gloms on tightly. Sometimes the adherence isn’t in the right spot to prevent the pathogen from doing its nefarious business. Antibodies that bind pathogens in just the right places, preventing infection, are called neutralizing antibodies. In either case, the resulting adhesion generates what’s called an immune complex, drawing immune cells to the site.

The researchers found that while many participants whose symptoms remained mild had healthy levels of neutralizing antibodies to SARS-CoV-2 from the get-go, participants who wound up hospitalized had initially minimal or undetectable levels of neutralizing antibodies, although their immune cells started pumping them out later in the infection’s course. A second finding involved an often-neglected structural aspect of antibodies’ “trunks”: They are decorated with chains of various kinds of sugar molecules linked together. The makeup of these sugar chains has an effect on how inflammatory an immune complex will be.

Many types of immune cells have receptors for this sugar-coated antibody trunk. These receptors distinguish among antibodies’ sugar molecules, helping to determine how fiercely the immune cells respond. A key finding of the new study was that in participants who progressed to severe COVID-19, sugar chains on certain antibodies targeting SARS-CoV2 were deficient in a variety of sugar called fucose. This deficiency was evident on the day these “progressors” first tested positive. So, it wasn’t a result of severe infection but preceded it. Furthermore, immune cells in these patients featured inordinately high levels of receptors for these fucose-lacking types of antibodies. Such receptors, called CD16a, are known to boost immune cells’ inflammatory activity.

The researchers also studied the antibodies elicited in 29 adults after they received the first and second doses of the Pfizer mRNA vaccine. They compared these antibodies with those of adults who didn’t progress to severe disease about a month after either being vaccinated or infected; they also compared them with antibodies from individuals hospitalized with COVID-19. Two vaccine doses led to overall high neutralizing-antibody levels. In addition, antibody fucose content was high in the vaccinated and mildly symptomatic groups but low in the hospitalized individuals.

The researchers tested their findings in mice that had been bioengineered so their immune cells featured human receptors for antibodies on their surfaces. They applied immune complexes - extracted, variously, from patients with high levels of fucose-deficient antibodies, patients with normal levels or vaccinated adults - to the mice’s windpipes. The investigators observed four hours later that the fucose-deficient immune-complex extracts generated a massive inflammatory reaction in the mice’s lungs. Neither normal-fucose extracts nor extracts from vaccinated individuals had this effect. When the experiment was repeated in similar mice that had been bioengineered to lack CD16a, there was no such hyperinflammatory response in their lungs.

The immunological factors the researchers have identified - a sluggish neutralizing-antibody response, deficient fucose levels on antibody-attached sugar chains, and hyperabundant receptors for fucose-deficient antibodies - were each, on their own, modestly predictive of COVID-19 severity. But taken together, they allowed the researchers to guess the disease’s course with an accuracy of about 80%. The researchers speculate that the abundance of CD16a on immune cells and the relative absence of fucose on antibodies’ sugar chains may not be entirely unrelated phenomena in some people, and that while neither alone is enough to consistently induce severe inflammatory symptoms following SARS-CoV-2 infection, the combination leads to a devastating inflammatory overdrive.

“We’ve identified an early biomarker of risk for progression to severe symptoms,” said Taia Wang, MD, PhD, assistant professor of infectious diseases and of microbiology and immunology. “And we found that antibodies elicited by an mRNA vaccine - in this case, Pfizer’s - differ in important, beneficial ways from those in people infected with SARS-CoV-2 who later progress to severe symptoms.” The upshot could eventually be a test that, given soon after a positive COVID-19 result, would help clinicians focus attention on those likely to need it most.”