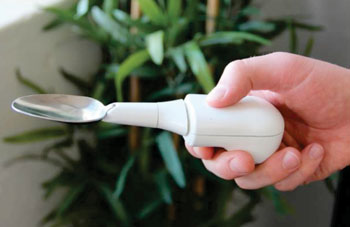 The company will join Google[x], Google’s research division, which is dedicated to making major technological advancements though ambitious projects known as “moonshots,” such as self-driving cars, delivery drones, and Google glass. The acquisition marks a further move for Google into the biotech and healthcare sectors, following the recent announcement on the development of a special contact lens for diabetics that is capable of monitoring blood-sugar levels.

The Liftware system is designed for people whose hand tremor interferes with daily activities. Sensors in the Liftware base handle detect a person’s tremor, and the device responds using motors to move the spoon opposite the tremor. The device can discern motion from hand tremor from other types of motion, allowing it to respond to just the tremor while preserving the user’s intended motion. In contrast to braces, which force a user’s hand to be still and can cause patient discomfort, Liftware allows the patient’s hand to shake while stabilizing food. Other attachment, such as a key holder, fork, and soup spoon are under development.

“Today we’re welcoming the Lift Labs team into Google[x]. Their tremor-cancelling device could improve quality of life for millions of people,” announced Google on its Google+ page. “We’re also going to explore how their technology could be used in other ways to improve the understanding and management of neurodegenerative diseases such as Parkinson’s disease and essential tremor.”

“We're joining Google[x] and will continue to make and sell our Liftware stabilizers. We could not have reached this point without the support of Rock Health, the National Institutes of Health, our customers, and the hard work of our team,” stated the LiftLab founders. “We're especially excited to work with the Google team to scale our operations and reach even more people who could benefit from using tremor-canceling devices.”

Google co-founder Sergey Brin, whose mother suffers from PD, discovered in 2008 that he also carried a mutation of the LRRK2 gene (G2019S) that increases the risk of developing the disease.