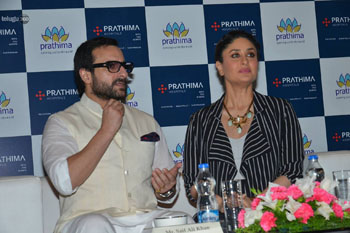 Image: Ambassadors Saif Ali Khan and Karina Kapoor at the launch of the expansion project (Photo courtesy of KVS GIRI).
Prathima Hospitals (Hyderbad, India) has announced an expansion project to establish several new hospitals across the Indian states of Telangana and Andhra Pradesh.

Prathima currently operates three hospitals in Kachiguda, Kukatpally, and Karimnagar (with a total of 1,500 beds) with centers of excellence in cardiology, critical care, gastroenterology, mother & childcare, neonatology, and orthopedics. The company will invest RS 3.5 billion (USD 52.46 million) in the project, which will include a fully integrated cancer care facility in Warangal and a new hospital in Hyderbad. The investment is in addition to the RS 2 billion (USD 29.9 million) invested in current projects, which included the purchase of Mamatha Hospital in Hyderabad.

“We are planning to set up hospital in every district headquarters in the State. The idea is to ensure people get best healthcare within their district without having to travel to Hyderabad. Typically, each hospital will have about 50-100 beds initially and may be ramped up later,” said Harini Boinipally, MD, managing director of Prathima Hospitals. “At every location a hospital is set up, we will make local doctors partners in the project, offering them 30% equity in that project.”

“This is the first time I am featuring as a brand ambassador with Saif. We decided to be part of the hospital chain, as this is for a noble cause,” said Bollywood film star Karina Kapoor, who was enlisted as along with her partner Saif Ali Khan to promote the expansion drive.

According to the World Health Organization (WHO, Geneva, Switzerland), India’s hospital bed strength should ideally be 2.6 beds for every 1,000 people in the population, but the country has a shortfall, with just 0.7 hospital beds per 1,000 people. Healthcare players see this as an opportunity, due to the upsurge in chronic diseases in India, new initiatives in the health insurance sector, corporate medical benefits programs, and government schemes which are creating high density traffic into hospitals.